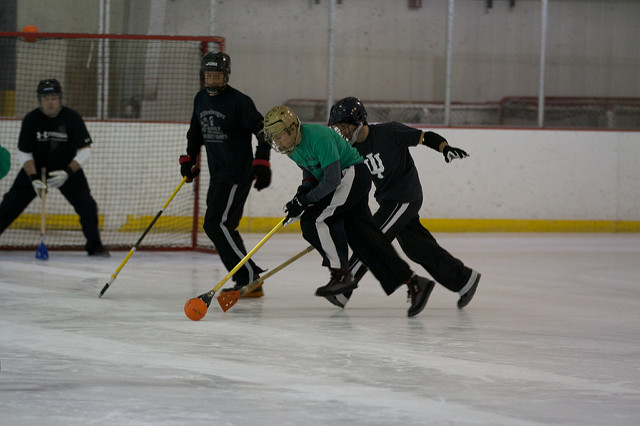 Whenever I tell people that I play in a couple of broomball leagues, the reaction is typically one of two responses. They say either “Wow, that’s really cool!,” or “What the heck is broomball?!?”

Yes, the “what is broomball?” question still comes up even as the sport has grown in popularity in recent decades. In short, broomball is a game similar to hockey. It’s played on ice, with two teams (usually six players per side including the goalie) trying to shoot into each other’s goal.

Read on for more information about the sport, and a list of suggested broomball equipment if you’re curious about joining a league.

What is Broomball? An explanation

Players use special broomball equipment such as tennis shoes or specially-made broomball shoes instead of skates. They also use sticks with plastic ends shaped like brooms, hence the name “broomball.”

Broomball can be played for fun recreationally, or as part of organized, high-level leagues. The sport is big at universities. Since it requires ice, broomball needs to be played in places with frozen ponds such as Canada, or places that have indoor ice rinks, like major U.S. cities and college campuses.

Read on for answers to some of your frequently asked questions about broomball, links to some of the best broomball sticks, gloves, and other equipment, and tips and strategies for playing the game.

Nobody knows for sure! The general consensus is that it started in Canada in the early 1900s. The non-profit organization USA Broomball suggests that the first modern players were street car workers who played with a soccer ball and actual brooms. For a more thorough level of detail, read our more in-depth post about the history of broomball.

As the game grew, it was refined and spread to the U.S., especially northern states like Minnesota, where it became quite popular. Games were reportedly being played there in the ’30s, with leagues emerging in the ’60s. Initially, teams had 10 players per side, making it more like soccer than hockey. But over time the roster sizes were gradually reduced to the current six players per side.

There are some reports that Scandinavians used to play a game similar to broomball back in the 10th century. That game was far more violent and could only be considered a very distant relative to the broomball game we all play today.

What is the difference between broomball and hockey?

Broomball and hockey are quite similar in terms of strategy, but there are a few key differences. First, as mentioned, broomball players don’t wear skates. They wear regular sneakers, preferably ones with a nice grip to keep them from sliding all over the place. There are some companies that manufacture shoes made specifically for broomball – scroll down to see our list of the best broomball shoes.

Second, the sport uses a small ball instead of a puck. And instead of hockey sticks, players use broomball sticks, which are made of wood or aluminum and have plastic broom-shaped knobs on the end. They may look silly, but they’re a lot of fun to use. 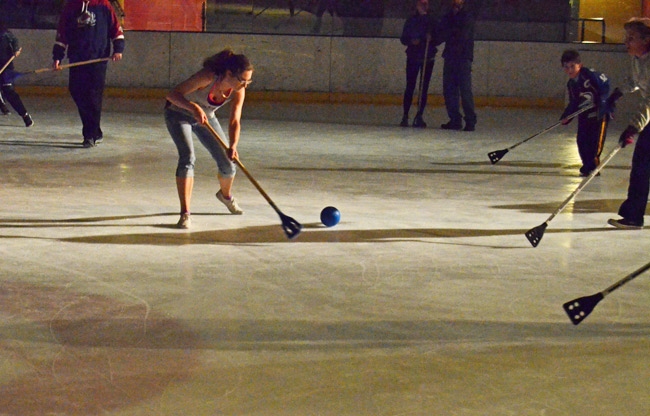 While some broomball games are played on regulation ice hockey rinks, often broomball leagues will use half-rinks or mini-sized rinks. That makes sense, since it requires more effort to run around on ice in shoes than it does to skate. Broomball can wear out players faster than ice hockey, and its participants are typically amateurs with fewer skills than hockey players, so the smaller rinks are a good idea for many reasons.

Though hockey is known for its hitting and body checking, these activities are banned in many beginner broomball leagues. However, advanced leagues might allow this type of physical play. Broomball leagues are often co-ed and typically feature players in their 20s and 30s, though some older players do participate as well.

The level of competition varies across North America. Games played by beginners obviously feature a lot more players tumbling and slipping and sliding on the ice. Higher-level league games with experienced players are fun to watch because they reveal a certain skill level and discernible strategy decisions.

Here’s an example of a broomball game where people play just for fun. It’s footage from intramural games at the University of New Hampshire. Note how the regulation ice rink is split into three rinks. This clip is great because it answers some basic questions about playing broomball:

By contrast, here’s a clip from the 2014 Canadian Broomball Championships. Check out the high-quality shots, slick passing, hard body checks, and intense nature of the battle. These players have been participating in this sport for years and have honed their craft.

What kind of shoes do broomball players wear?

Beginners in casual leagues will often just wear tennis shoes, but players who play competitively tend to purchase specific types of broomball shoes. These shoes have a tough exterior with rubbery soles that grip the ice rather than sliding.

Broomball shoes can be expensive, sometimes costing more than $100. Currently, Acacia and D-Gel are the top brands on the market. Here’s a closer look at two of their top broomball shoes: 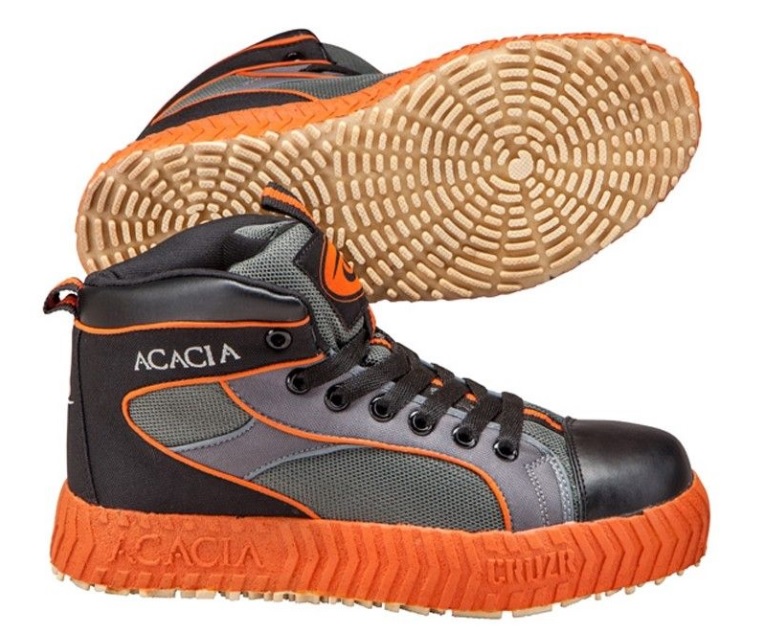 The popular Acacia shoes can be spotted from a mile away thanks to their recognizable orange color. The Gripinator is designed for both indoor and outdoor use. Acacia uses its “Spider Gel” technology to create one of the best sole grips of any broomball shoe.

D-Gel’s Gripper is lightweight, which is great because nobody wants to stomp around in heavy shoes! Being fast is a big advantage on the ice, so the Gripper aids in that goal. The stylish black and gray shoe comes with red trim. It gets high points for its traction, thanks to the sole that features rows of rubber nubs.

What kind of sticks do broomball players use?

Broomball sticks (which can be referred to simply as “brooms”) feature a broom-like knob on the end rather than a blade. Sticks can be made of wood or aluminum. The last league I played in gave the players a basket of wooden sticks to choose from each week when we arrived at the rink.

Advanced players often purchase their own sticks. Once again, Acacia and D-Gel are the two primary brands for this product. Below is some information on one of the best sticks, the D-Gel aluminum broom.

Aluminum sticks are typically higher quality than wooden ones. Most players you see bringing their own brooms to games have aluminum models. The D-Gel stick is four feet long and has a nifty curved broom on the end. The slight curve provides advantages when it comes to ball handling and getting off elevated wrist shots.

Not everybody wear all of this gear. When I play, I wear basic soccer shin guards under my jogging pants, and volleyball knee pads to keep my knees and legs safe.

As for the other gear, take a look at a few of our recommended broomball items:

Some players in recreational leagues choose to wear heavy-duty gloves to protect against injury. Others just want to keep their hands warm, so they wear thick winter gloves that you’d wear outside on a snowy day. For the top of the line in terms of protection, take a look at the Acacia Impact gloves. The padded grip guards against injury while allowing for ample movement and control of your fingers.

Many broomball leagues offer helmets for their players. You really shouldn’t be taking the ice without one, given how easy it is to slip and fall. For those who want to purchase their own helmets, many players just go with a standard hockey helmet. There really isn’t a helmet made specifically for broomball.

That said, the Bauer helmet is a pretty safe bet. It’s a highly-rated helmet that offers solid head and ear protection, which is all you need when you’re playing broomball at any level.

Two main types of broomballs are commonly used today. One type looks like a miniature soccer ball. It has little hexagonal panels melded together and is fairly soft and squeezy to the touch. The other is shown below.

This Acacia ball is an example of the other type of broomball. It’s harder and more firm. It comes in orange and blue, which for some reason have become the two common colors of all brands of broomball. These balls are 5.5 inches in diameter and weigh roughly nine ounces.

How can you start playing broomball in the USA?

Broomball leagues can be found all over the country, with the majority in cold-weather cities where ice hockey is popular. Minnesota has the most broomball leagues, including Cities Sports Connection, which runs from December to February in Minneapolis, and St. Paul’s winter recreational leagues.

Ohio, Wisconsin, California, New York, and many other states also have a substantial number of broomball organizations. Take a look at our list of broomball leagues in the U.S. USA Broomball also has a list of leagues by state, but their list somewhat outdated and many of their links are broken.

What are some tips and strategies for broomball beginners?

There are no requirements for joining a broomball team. You should just have a basic understanding of how hockey works, as the strategy is largely the same. Use the boards to your advantage, especially when you’re playing defense. Always try to clear the ball away from the goal along the boards – never clear it up the middle near the goal!

If you have more than six players on your team, you’ll be rotating players in and out. Keep your shifts short! Broomball can be very exhausting, so you will want to make sure you don’t get stuck on the ice for too long.

If you have time before the game, practice shooting so you can get used to using the broom. Elevating the ball is key to scoring goals, so you’ll want to learn how to get it up off the ice, either with a quick wristshot or a slapshot. Want some other suggestions? Check out our guide to broomball tips and strategy.

Other than that, just have fun! If you’re curious about playing broomball, just give it a shot! It’s a great workout, and the people who play it are generally fun and friendly. You just may find a new favorite sport!