Thinking about giving broomball a shot? Check out our list of broomball leagues in the USA. The list is current as of 2017. It includes all of the confirmed, active broomball leagues and facilities we could find across the country, as well as rinks where broomball can be played through private ice rental.

If yours is not listed, visit our Contact page and drop us a line with your league’s information! 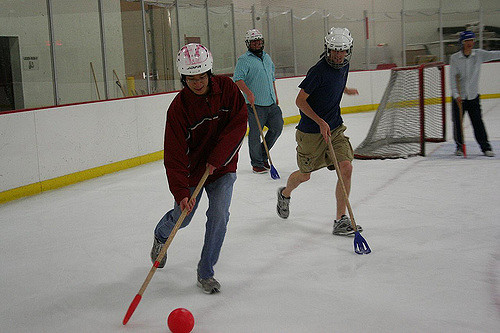 Huntsville: Benton H. Wilcoxon Iceplex
This complex does not currently offer any broomball leagues, but it does offer broomball during private sessions when guests can rent out the ice. Equipment is provided.

Homer: Kevin Bell Arena
It appears as though this arena does not offer formal broomball leagues but may have open play.

Chandler: Ice Den Chandler
No current broomball leagues operating, but guests can rent out the ice for private games.

Gilbert: AZ Ice Gilbert
No leagues, but private ice rental is available for playing broomball and equipment is provided.

Scottsdale: Ice Den Scottsdale
No current broomball leagues operating, but guests can rent out the ice for private games.

Santa Rosa: Snoopy’s Home Ice
Large groups can rent the ice by the hour on Friday and Saturday late nights. All equipment is provided.

Colorado Springs: Colorado College
This popular intramural league has been around since 1995 and runs January through March.

Denver: Sports Monster
A six-week co-rec league at Big Bear Ice Arena starts in November. Participants can join as an individual or by signing up a full team.

Chicago: University of Chicago
Intramural league for U Chicago students.

Evanston: Evanston Broomball League
A long-running league in the Chicago north suburb of Evanston with games held at Robert Crown Ice Complex. This is a fairly advanced league with skilled players.

Glenview: Glenview Ice Center
Recreational broomball league play is offered Sunday nights from October through February, and groups can also rent out the ice for their own games.

Biddeford: University of New England
This university has leagues and tournaments for its students.

Orono: University of Maine
The campus has broomball tournaments for students.

Houghton: Michigan Technological University
This league records videos of games and posts them online for people to watch. Cool!

Blaine: Minnesota Broomball League
This is an organized league featuring more than a dozen teams, with a website tracking game results and statistics.

Burnsville: City of Burnsville Broomball
Adult men’s and mixed-gender leagues in January and February on Monday and Friday nights, respectively.

Minneapolis: Augsburg Broomball League
Another very organized league of skilled and experienced players, with games played on Friday nights at Augsburg Ice Arena. Scores and stats are posted each week.

Minneapolis: University of Minnesota
Student league, 8 on 8 with games played at Ridder Arena. The university even has broomball available as a physical education course. Earn a credit for playing!

Butte: Montana Tech
Student broomball league. Page hasn’t been updated in a few years, so league may not currently exist.

Lincoln: University of Nebraska-Lincoln
Student club broomball league. May not be active anymore, since page has not been updated since 2014.

Omaha: Omaha Broomball League
For those who prefer a formal league rather than pickup games, the Omaha club plays at Grover Ice Rink.

There are no current leagues in Nevada, but see the California listing for the league in Truckee, California, which is near the Nevada border, 30 miles from Reno.

Somerset: New Jersey Broomball Club
An organized travel team of experienced players. It is unclear which league they play in.

Los Alamos: City of Los Alamos Broomball
Occasional adult broomball games are hosted at the ice rink during the winter.

Buffalo: Holiday & Leisure Rinks
Co-ed broomball league. A set number of men and women must be on the ice at all times.

Dayton: Dayton Broomball
An annual league with games on Monday and Wednesday during the winter and spring.

Dayton?: Midwest Ohio Broomball League
Active league since 2004. Very little information is available on the league’s website. It is not clear how to register. It is not even clear where the games are played, though the league appears to be located in the Dayton area.

Pittsburgh: Pittsburgh Broomball Club
An organization created to grow the sport in western Pennsylvania. Open-play broomball games are sometimes held which are free for newbies.

Pierre: Pierre Area Youth Skating Association
Private broomball events available, though it is not clear if they are for adults or youth players.

Montpelier: Central Vermont Women’s Broomball League
Here’s a rare find, an all-female broomball league. Games take place at the Central Vermont Memorial Civic Center. This is one of the most sophisticated leagues out there. Games run from October through February and the league even tallies individual player stats.

Kirkland: Sno-King Ice Arena
Rent the ice by the hour for private broomball events of up to 50 people at the arena.

Renton: Sno-King Ice Arena
Rent the ice by the hour for private broomball events of up to 50 people at the arena.

1 thought on “List of broomball leagues in the USA”